The recent Genshin Impact 2.0 leaks have shown Ayaka in a whole new light, with fans reviewing her general gameplay.

Ayaka has mostly remained the same since it was first disclosed over a year ago. That said, sometimes the characters are changed during development. So Ayaka fans can rest easy knowing that the Inazuma Noble will not be too different.

Likewise, some Genshin Impact fans are not even aware of Ayaka or his skills, so this article may shed some light on this topic.

Genshin Impact players have been waiting for Ayaka for a long time now, so the leaks about her outing in Inazuma only add to the anticipation.

Genshin Impact leaks: everything fans need to know about Ayaka

Whether it’s a former Genshin Impact fan aware of Ayaka’s skills or a new one looking to learn more about this upcoming playable character, they should be excited to know that there is a good amount of content to cover.

This article will go over Ayaka’s idle animations, elemental skill, elemental burst, and other minor gameplay details as seen in the videos listed below.

Ayaka’s gameplay was leaked a long time ago, but the recent Genshin Impact 2.0 leak has a few things that set it apart from the old version. First of all, this tweet shows that the new Electro Abyss Mage is the enemy being beaten up by Ayaka.

Second, Ayaka’s overall animations are smoother, and her damage counts have been adjusted appropriately given her recent buffs.

As for this video itself, it’s worth noting that after Ayaka’s sprints (similar to Mona’s), her regular attacks are infused with Cryo. Next, she shows off her Elemental Skill, attacks Abyssal Electro Mages for a while, then unleashes her Elemental Burst.

Ayaka’s elementary skill is surprisingly simplistic by the modern conception of Genshin Impact. This makes sense because it’s mostly the same one that was leaked during the closed beta phase of Genshin Impact.

Her elemental skill is known as Kamisato Art: Hyouka, which summons a snowflake seal below her before blooming for Cryo AOE DMG. The scale of this attack increases from 239.2% at level 1 to 568.1% at level 15, with a fixed cooldown of 10 seconds at all levels.

It’s just a simple AOE attack, which makes it the simplest part of Ayaka’s kit. Some Genshin Impact fans will find this incredibly boring, but it can still synergize with other elements for easy elemental reaction, especially since the range is quite forgiving. 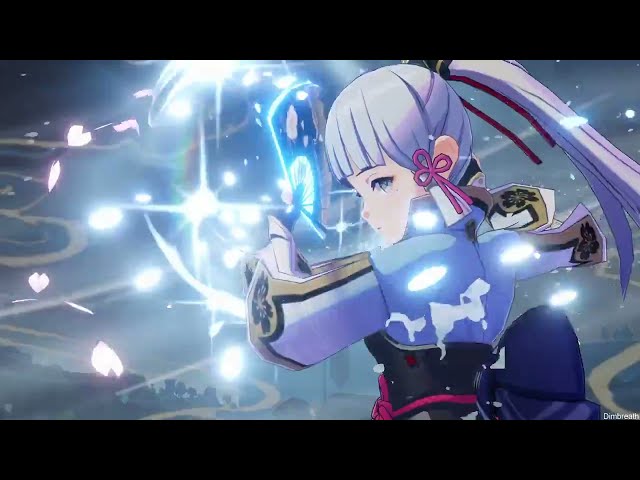 There is something interesting about Ayaka’s elemental burst in Genshin Impact that is worth discussing, as seen in the video above. Currently, Ayaka is known to summon three Cryo-infused Blade Storms that will knock back enemies upon hitting them.

Interestingly, Blade Storms stop moving if they hit a frozen enemy, as seen with the Hydro Mud above. Ergo, that would mean his Elemental Burst won’t always force an enemy out of position, which could be used to a player’s advantage.

His Elemental Explosion is known as Art Kamisato: Soumetsu in Genshin Impact. It lasts for five seconds and has a 20 second cooldown at all ranks. It only costs 80 energy, with the damage scaling pretty well at higher levels.

As mentioned earlier, Ayaka’s sprint is quite similar to Mona’s. The main difference between the two is that the former uses the Cryo element, while the latter uses Hydro. It seems like a small change at the start, but there are some significant differences between the two sprints.

When Mona sprints on the water, the area she was on stays the same. If Ayaka sprints on water, she can freeze a small amount of water when she releases her sprint.

Ayaka’s sprinting also adds Cryo to his attacks for a few seconds after the animation ends, which is more than what most Genshin Impact characters get for their sprints. It will be interesting to see where Ayaka goes in Genshin Impact’s current metagame.

Next A story of scarecrows, sculpture and affordable art

‘Avatar: The Last Airbender’ and ‘SpongeBob SquarePants’ podcasts are on the way